Today marks 12 days being away from my littles. I've never in all of their (and my) lives been apart from them this long and it is excruciating. I cannot, I repeat CANNOT wait to hold them and love them to pieces.

And, to even begin to describe the excitement Malela and I have with The REEL Projects upcoming endeavors would be impossible. Words clearly do not and cannot suffice. It will be a long road ahead as there is a ton of work, planning, fundraising etc... but it will be done with passion and integrity.

Meanwhile, back home in California- my land is burning. My friends are displaced and some, have even lost their homes. These are tough times, times of reflection and appreciation for what is- and what was. Sending love and strength to endure through these difficult days and days ahead.

I am grateful, thankful and learning to be more a little more patient with time.

With love from South Africa,
krista

Busy day in Ndola! Then adventured into town...walked like 5km 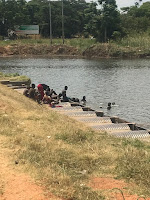 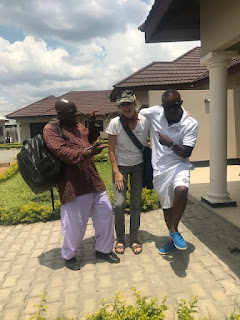 Papa Isaac arrived last night and what a treat it was to have him as our guest! We spent hours reminiscing about Kala camp (Isaac was the Refugee officer working with UNHCR in 2007), sharing stories both old and new- I made a delicious homemade vegetable curry then we all ate together and began to discuss our REEL Project future endeavors. It was another inspirational evening, to only continue this morning after an early breakfast followed by a full day of kazi kazi! 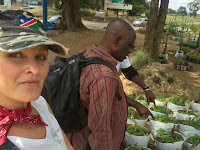 Isaac has been working in Organic Agriculture for years now, he even took a three year course and is certified. He has been working with a local doctor in Lusaka and has conducted multiple trainings over the course of the past few years.  We discussed the importance of composting and organic farming and how we can incorporate this into an Income Generating Activity (IGA) in Kalemie. Together we came up with: The REEL Organic Community Garden.

Thus far Malela and I have come up with an exciting amount of project ideas- so many that we had to take a few deep breathes and a number of steps back! Based on the current situation, the feedback that we have received and how to move forward- The REEL Project's next project initiative will be the following:


Ok- Papa Isaac is almost (safely)home, and it is officially....oh dear, only 6:30pm here haaaa. I am so ready for bed!
Until later? -Inspiring work is exhausting.
-krista
Posted by krista at 8:30 AM No comments: